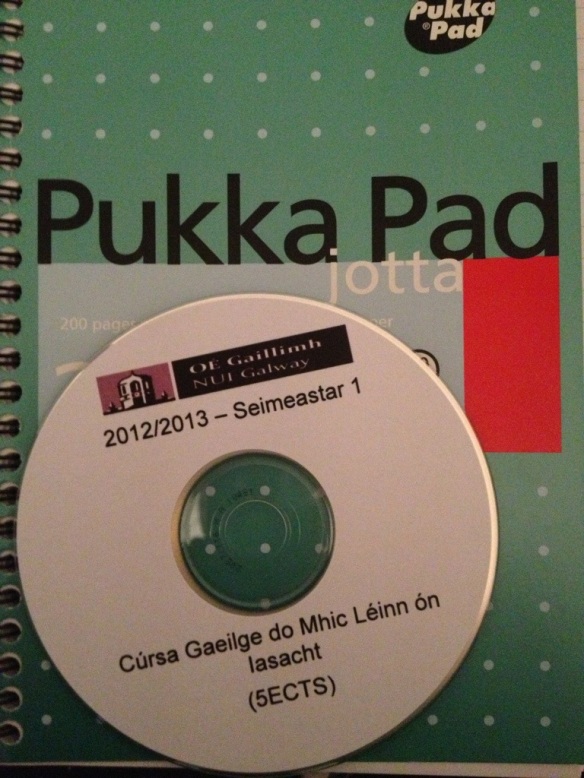 One of the first things I was warned of when I decided to take an Irish language course is that Irish is not a Latin-based language, and therefore, sounds nothing like anything I have ever heard before.

However, as with most languages, new technology brings new vocabulary. Words like “taxi” are easily recognizable across languages, and the internet has brought along a whole new global terminology that often breaches language barriers.

Last week in Irish for Beginners, my instructor said something that caught my attention. He said “the technology of writing came from the Latin,” meaning that even though Irish isn’t a Latin-based language, the invention of the printing press introduced a new technology that required a whole new set of terms.

For a variety of reasons I’ve yet to ennummerate, the Irish words for “book” and other words belonging to print culture are all Latin-based. In an attempt to tease out this connection for a possible essay topic in my Book History course, I emailed my Irish professor and asked him to clarify.

Turns out I was on the right track. He sent me confirmation of my interpretation of his statement, provided the title of a book and the location of an academic article on the topic, mentioned two additional professors on campus who might be able to help me, and printed out some more material for me to pick up.

It’s intimidating, because I don’t know Irish. I barely know how to say “hello” and “thank you.” I’m not sure if I’ll be able to handle this topic, or even where I want to go with it. I’m attempting to read The Printing Press as an Agent of Change right now, and there is a discussion of oral culture vs manuscript culture vs print culture that might be relevant, but I just don’t know yet.

Irish is a very precise and descriptive language. The term for another new piece of technology, the mobile phone, is “Fón póca,” which translates as “pocket phone.” I thought I might look at the Irish terms within print culture to see how they interpreted this new technology. If the creation of the codex was the last major revolution in the history of books, then how did they describe these new objects in Gaeilge?

But what else? Is it possible the Irish language influenced print culture in any way? I’ll need to read more before I know if there’s enough Book History here to warrant a paper. It’s a little scary.

I’ve been watching a lot of TG4 lately, which is the Irish language channel on my TV. The show that just finished was called Déanta in Éirinn, in which this dude drives around the country in a DeLorean and attempts to use only products made in Ireland. It was kind of sad – he found out that even the sticks they use in hurling are manufactured elsewhere.

I happened to see the episode where he goes into Eason’s looking for a book or magazine printed in Ireland. I thought this was already problematic, because even though Eason’s is an Irish bookseller, the company began life as an Irish stake in a British bookstore chain.

Of course, none of the mainstream magazines or superstar authors he asked about were available on pure Irish wood pulp, so he had to settle for a Pat McCabe title from an independent publisher, Raven Arts Press – which is the type of title this book snob thinks he should have been looking for in the first place.

But because this was the Irish language channel, all the interviewees had their titles spelled out on screen in Irish, so I learned two new book-related words in Gaeilge: