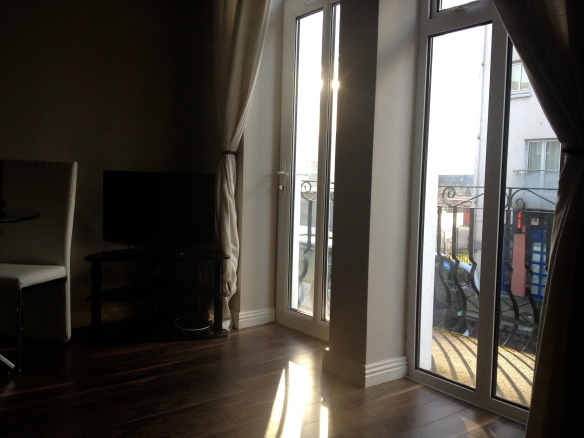 Over the weekend, I’ve been staying in what’s supposed to become my apartment. It’s got a great location, only slightly out of my price range, and it comes with an extra bedroom.

I don’t want to be writing about this right now, but it’s the only thing on my mind. I was supposed to sign the lease today, but it’s almost 11 o’clock and it hasn’t happened yet. Something feels… wrong.

It’s not a safety issue. The price bothers me, but it’s nothing I can’t handle. The extra room will be nice when people come to visit. All of this is fine, but somehow the combination of slightly higher price and wondering “what kind of American spacehog princess needs an extra feckin’ bedroom?” has me feeling weird.

Like I said, I don’t want to be writing about this right now. I want to be lying on the couch watching Moneyball. I don’t have class tomorrow, and part of me just wants to go to sleep for the next 36 hours.

There was an issue last night – Sunday night – when I went to bed at 10pm and was woken at midnight by the people next door singing shitty songs at the top of their lungs. I’m talking “I Want It That Way” by the Backstreet Boys. I’ve sung some BSB in my time, but it was really disturbing to hear a male voice – accompanied by three chicks – booming boy band songs through the walls.

i just don’t know. I went to look at another apartment tonight. Price range is much better, and the location has something approaching sentimental value for me. It addressed a lot of the issues I have with this apartment (no separate taps for cold and hot water in the bathroom sink), but I didn’t absolutely love it.

I don’t love this one either. Part of it was the landlord rushing me into a decision; part of it was me wanting to have a damn address already because that is the first step in the entire bank / loan money / getting legal with the garda / finding a job process. If I move, I’ll need to file a change of address, which I’ve heard is a pain.

I had to choose between this apartment and another on the Claddagh. It was pretty much the same price, but more practical. One room. And he would have let me have a cat. No one else in Galway is willing to let me have a cat.

I don’t even regret letting that apartment go. I just don’t feel right in this one. It’s growing on me, a little, but I haven’t figured out the washer/dryer and I’m worried these late night serenades are going to be a common occurrence. But hell, we’re in the middle of a city; what was I expecting?

There was another apartment that I saw online a few weeks before I got here. It was supposed to become available today, but of course it was already gone when I arrived nearly two weeks ago. I feel like that was my apartment, even though I never saw it in person. I keep waiting to hear from the punk-ass realtor, saying the people (in my mind, it’s a couple) who stole it out from under me can’t move in and would I please take it? Ridiculous.

Honestly, every time I look for something else, I realize there’s nothing better than this apartment I’m in now. It’s not perfect, but it’s very nice and it got me out of the hostel. I’m a little scared about making the rent every month – I’ve got to get cracking on finding a job.