Today I went in to see the Houghton Mifflin Harcourt office in Dublin. I did some contract work for HMH in Austin over the past year, and I would definitely like to maintain a relationship with the company while I’m here in Ireland. I went in to ask a few questions and to make sure they know I’m available for any internships or volunteering projects they have going on over the next year.

Then I went to the National Print Museum.

The National Print Museum is located in Beggar’s Bush, which turned out to be a very nice area of Dublin, just past the canal and within sight of Aviva Stadium. The old barracks set-up means the traffic noise is deafened by the buildings that surround the museum. It’s a quiet little spot with its own cafe and a tiny gift shop.

Dermot McGuinne, who spoke to our Book History class last week, is a [the] renowned Irish type design expert. In passing, he mentioned the exhibit he was curating, From Colum Cille to Colmcille: The development of the Monotype irish printing type series 121, which opened at the Print Museum last night. Since I’m interested in the relationship between the Irish language and the printing press, and I was planning to be in Dublin anyway, I made it a priority to see the exhibit. 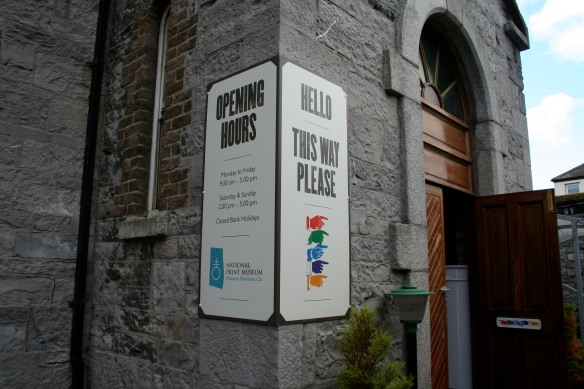 I took some time to look at the equipment on the ground floor before going upstairs to the exhibit. A woman I sat next to on the bus yesterday told me there was a printing press that had been featured in a TV show, though she couldn’t remember the name. It turned out to be a press built specifically for the set of The Tudors.

There was also a video demonstration of how all the different machines worked. I thought it was kind of funny that I was watching a video of old men operating the machines in the museum while in real time the cleaning staff – all young and female – were wiping the dust off the displays.

I went upstairs, but before I reached the exhibit, I was sidetracked by the children’s section with its own little library. The first book I picked off the shelf was called Johann Gutenberg and the Amazing Printing Press by Bruce Koscielniak… and published by Houghton Mifflin Harcourt.

With my morning nicely bookended by HMH, I made my way over to the exhibit, which was fascinating. A few minutes later, an older gentleman came up the stairs, sat down at the kids’ table with Johann Gutenberg and the Amazing Printing Press by Bruce Koscielniak, and started taking notes as he read.