Tonight, I went to the culmination – at least for me – of the Galway Theatre Festival, which has been running this past week at venues all over town. I went to three plays over the course of the week, and for someone who claims to not like theatre, I had an overall pleasant experience.

I bought tickets for the Wednesday night opening of An Taibhdhearc, the Irish-language theatre in Middle Street, to see if I couldn’t challenge my Beginner’s Irish. The very first show in the theatre was to be Pinocchio, so I thought it might be an easy story to follow. This wasn’t Disney’s Pinocchio, but rather Pinocchio: A Nightmare, in which our little wooden boy is now a hardheaded Irish teenager (played by an actress with an accent I’m told is Corkian). The creativity employed in the bilingual production provided a great example for how I – or anyone, really – should approach learning Ireland’s native language. Bilingual conversations where one character’s Irish question could be deduced by the other’s English answers, humorous descriptive placards before scenes, detailed sound effects produced on stage by an actor visible to the audience, and simply great acting made it easy to see the complementary interaction between Gaeilge and English in modern Ireland.

The next morning, I caught the 11am showing of Sanctuary at the Blue Teapot Theatre. This was a play about the love lives of people with intellectual disabilities, and it was very sweet and funny. One of the supporting actresses, who becomes involved in a secondary love story, had some of the best comedic timing and deadpan delivery I’ve ever seen. It didn’t hurt that the group’s cool-but-sensitive-and-understanding carer, Tom, was played by a very attractive actor that had several girls in the audience giggling. An inspired set design and a few loose parallels to another Disney movie, Beauty and the Beast, brought it all together around the question we all sometimes ask ourselves: How could anybody love me?

I finally got to see the inside of the Druid Theatre when I turned up (and I seriously considered not going) for the 5-euro event “24 Hour Theatre” tonight. The participants (many of whom I recognized from campus) had 24 hours to write, rehearse, and perform 15-20 minute plays. There were three groups, with three plays, which grew increasingly more meta over the course of the evening. We started with a small-town Ireland take on Hansel and Gretel, moved to a hilarious group therapy session, and were spoken to directly about the nature of drama by the characters that manifested on stage as the actors themselves. The first play had the best writing, the second had the best acting, and the third had the best personalities. All in all, it was very inspiring and I’m glad I went.

Throughout the week, I’ve been hearing about all the plays I should have seen. Home has been praised frequently, and there was some Beckett I didn’t know about when I bought my tickets. I also heard good things about The Butcher Molloy, which is apparently set during the last time Galway won the hurling final and thus could have been a lot more poignant if the Tribesmen had gotten the win last Sunday. 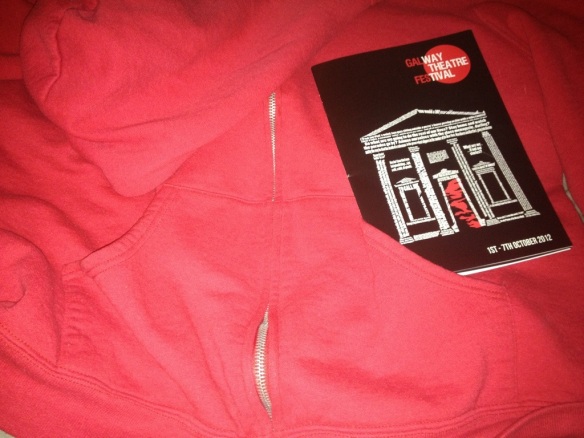