In preparation for my big move to Ireland, I have been dismantling the house I have lived in for the past five years. Books were the first order of business.

I’ve sold 50 to Half Price Books, packed 250 away in storage, and have another odd 25 laying around until I decide which are coming with me. This is on top of the 200 or so I sold during a spell of unemployment a few years ago.

There was also another batch of 50 books I had forgotten about: the ones listed on Amazon. Of those listings, I had sold about 20, but the other 30 remained active online. Still, I hadn’t moved any in well over a year, so it was easy to forget.

As I started packing books for the move, Cosmopolis hovered around the “to be sold” pile. Then I thought I might read it before the movie came out, and placed it in the “take to Ireland” pile. The next day, I decided there wasn’t a chance of that happening, so I packed it in storage. Two days later, it sold on Amazon.

This served as a helpful reminder to close my seller account before I leave the country and no longer have access to my books. It was kind of a pain to dig through cardboard boxes – in a storage unit, in Texas, in August – to find the book, and I didn’t quite get around to it within the three-day window I had promised as an Amazon seller.

In the end, I canceled the order, issued a refund, and sent an email to the buyer telling her I was shipping the book anyway at no cost to her. Then I closed all my Amazon listings and started reading Cosmopolis.

Honestly, the thing about Don DeLillo that most sticks out in my mind is that Sandra Bullock mentions him in that terrible movie, The Proposal. (I only saw this movie because of the publishing angle, I swear.)

Sandra Bullock’s character’s reason for violating the terms of her Canandian-in-America visa in order to attend an international book event – thus setting up the immigration impetus for faking a proposal to her American-born assistant so she’s not exiled to the Toronto office – is  practically delivered with a yawn:

“I had to go. We were going to lose DeLillo to Viking.”

I didn’t expect to like this book. I’ve owned it for a while, because I knew it was something I was supposed to read. But I drug my feet and never got around to it. I barely paid attention to the trailer the first time I saw it. Upon a second viewing, however, something caught my eye. A familiar face.

Her name is Sarah Gadon. Highbrow filmgoers may recognize her as Carl Jung’s wife in another Cronenberg movie, A Dangerous Method, but I know her best as Katie from Being Erica.

Being Erica is one of my top-three favorite TV shows of all time. It’s Canadian. Erica is a 30-something Jewish girl from Toronto who participates in time-travel therapy sessions. In her working life, she cobbles together a publishing career out of sheer willpower and a love of books (and a Master’s degree). I plan to blog extensively about Being Erica in the future.

Katie, or Sarah Gadon, is Erica’s very best frenemy from high school, a columnist in Boston who ends up writing a book that Erica believes will be a surefire bestseller. 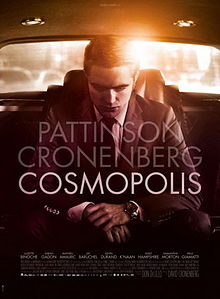 Just from watching the Cosmopolis trailer, it was clear that Sarah Gadon played Robert Pattinson’s love interest. After reading the book, I can confirm that the character of Elise Shifrin is the most consistent female presence in the protagonist’s life, a foreign-born poetess who manifests at various times to share meals with the RPattz character and is worth something like $735 million (I can’t look it up; the book is already in the mail).

I don’t feel bad for focusing on the Hitchcock Blonde in this book/film. It’s such a man’s tale that I get the sense that I have intentionally been left out. No girls allowed. DeLillo is even kind enough to have one of the characters – a woman – explain it slowly so my silly lady brain can understand:

“Never mind what women think.
We’re too small and real to matter here.”

I fell asleep reading the final pages of Cosmopolis on Saturday night. You know you’ve really connected to a book when you doze off during the climax. To be fair, I had been up late at a screening of that opus of “tragically Canadian sensibilities,” Scott Pilgrim vs the World. I woke on Sunday to find the book still open on the pillow next to me.

I promptly finished, with little-to-no fanfare, then spent the day packing things to move into my storage unit. I chose to focus on clothes, athletic equipment, and home decor.

The final items to go into the home decor tub were the frames from my picture wall. As I took down each frame, I tore pages out of an old issue of Vogue to wrap around the delicate glass. The faces of the Olsen twins, Charlize Theron, and various starving models glared out at me as I ripped.

Then there she was again.

Sarah Gadon, Toronto-born actress, making good with two Cronenberg films at the ripe old age of 24 and profiled in the December 2011 issue of Vogue. I had either skipped over that page the first time I flipped through the magazine or had completely forgotten about the article. In the accompanying photo, she’s wearing Valentino and a fantastic pair of blue Mary Janes. The lede evokes Grace Kelly, there’s mention of ballet lessons, and the interviewer managed to get a quote from Cronenberg that includes the phrase “upper-class elegance.”

Still, I will always remember Sarah Gadon for the scene in Being Erica when Katie and Erica are so absorbed in their bickering at a Toronto movie theatre that they deny their pregnant friend Judith an escape route to the bathroom. When the inevitable finally happens and Judith’s water breaks, Katie stares at the ground, wrinkles her nose, and observes:

Vogue, Sarah Gadon, and what’s left of the picture wall.